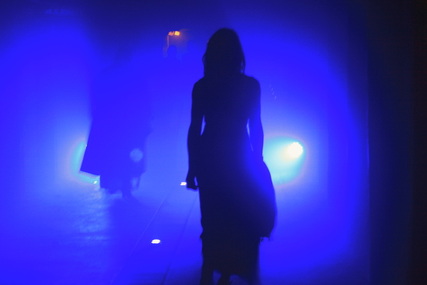 Blame it on Eve!

The work focuses on the character of Eve. 'Eve' means ‘living’, ‘enlivening’ - yet she is known as the temptress in Eden, a conniving Eve, and the tool of the serpent - a.k.a. Satan. But the Eve in this piece is no victim. This Eve takes a stand!

The soundtrack is of smashed glass mixed with gunshots - religion and violence. She is running through the space - under tables, chairs etc. Running to safety? Avoiding the bullets? At times she stops and dances - a Yiddish wedding dance for example - and then continues to dodge. She reaches a wall. Trapped. Frozen in a statue. Music: Christian choral voices mingling with Jewish Klezmer mingled with the Muslim call to prayer. The voice of Patti Smith emerges singing: “Jesus died for somebody’s sin but not mine”.